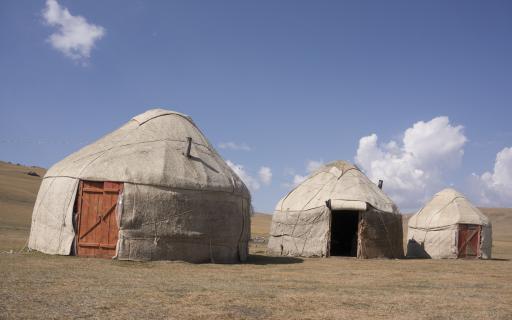 Discover a Land of Nomads 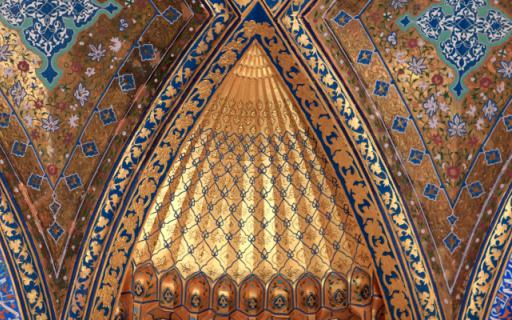 At the Heart of the Silk Roads 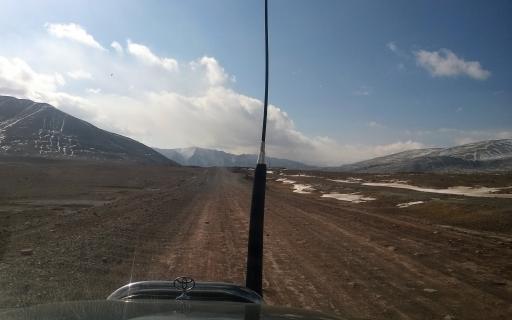 In the Birthplace of Cultures 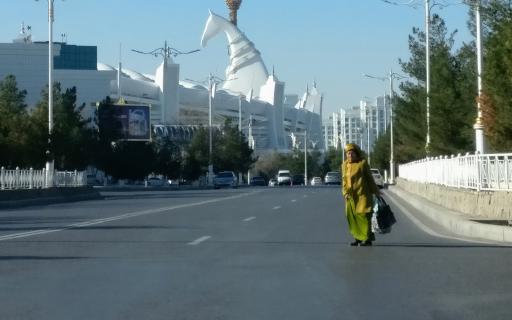 Earth of Legends and Mysteries 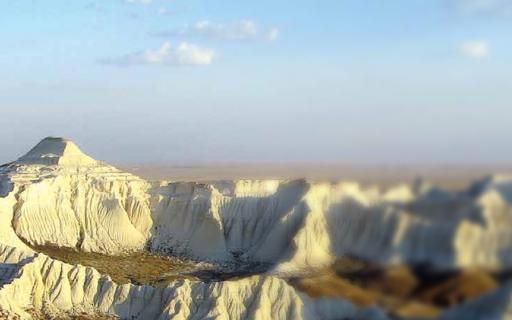 Nomads of the Steppe 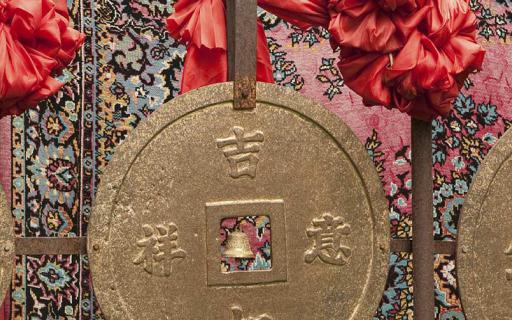 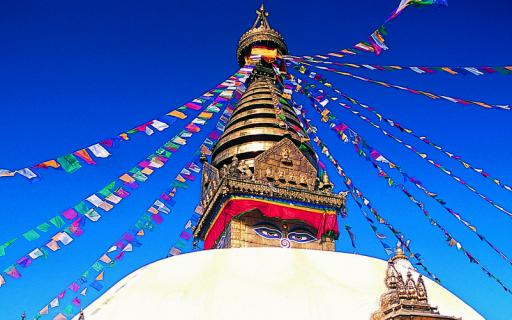 The roof of the World 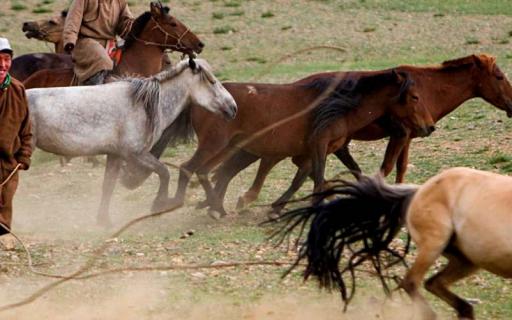 The Empire of Gengis Khan 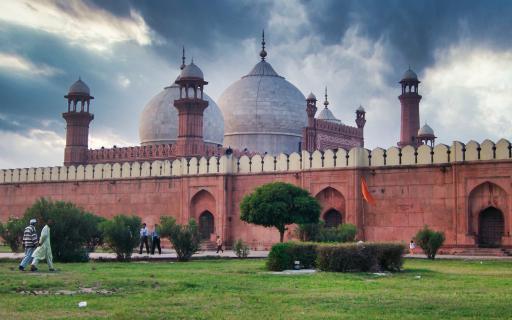 The Land of Adventure and Nature 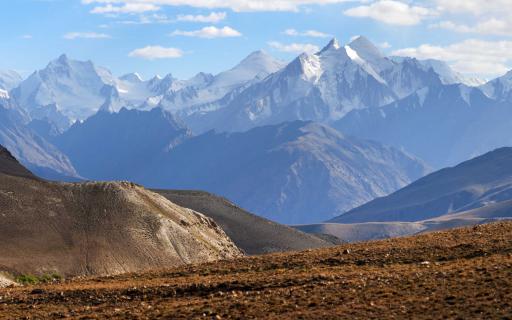 For the safety of our customers, we are pleased to announce that we have received the Safe Travels stamp by the Association of Kyrgyz Tour Operators.

The Chong Tash campsite, which means "big stone", is recorded in the writings of Simeon Tianchansky, but Buddhist inscriptions show that the place was known long before.

23 km west of Alichur there is a hydrogen sulfide geyser that spurts out onto a plateau, 300 meters south of the Alichur River, surrounded by mountains, with temperatures reaching 71 ° C.

23 km west of Alichur there is a hydrogen sulfide geyser that spurts out onto a plateau, 300 meters south of the Alichur River, surrounded by mountains, with temperatures reaching 71 ° C.

The Moldobashi peak is located in the Djetim massif which marks the border between the oblast of Issyk Kul and Naryn. From Kyrgyz, one could translate by "the head of the one who prays". The easiest access is from the village of Archaly, to the north, if not from the Naryn nature reserve, to the south.

The Moldobashi peak is located in the Djetim massif which marks the border between the oblast of Issyk Kul and Naryn. From Kyrgyz, one could translate by "the head of the one who prays". The easiest access is from the village of Archaly, to the north, if not from the Naryn nature reserve, to the south.

Uzbek culture is very rich, not only by museums towns, but also by the mix of people for thousands of years.

The visitor  is perplexed after visits of Khiva, Samarkand and Bukhara. These museums-cities have been remarkably restored.

The culture of Afghanistan has persisted for over three millennia, dating back at least to the time of the Achaemenid Empire in 550 BCE. It is mainly a tribal society with different regions of the country having their own subculture. Almost all Afghans follow Islamic traditions, celebrate the same holidays, dress the same, eat the same food, listen to the same music, and are multilingual to some extent. Persian culture and architecture is still present. Some Zoroastrian festivals are still celebrated like the New Year "Navruz".

The Tajiks are heavily concentrated in the northeast, but also form large communities elsewhere, such as in western Afghanistan. The Hazaras tend to be mainly concentrated in the central region, while the Uzbeks are mainly in the north. In the southern and eastern region, Pashtuns live in accordance with Pashtun culture and are generally bilingual in Pashto and Dari.

Afghanistan has been the main crossroads of Central Asia, South Asia and the Middle East, which has greatly influenced its culture.

The discovery of the Mohenjo-Daro site is proof that the Indus civilizations were the basis of Indo-European cultures. Then influenced over time by different peoples and empires: Aryans, Persians, Ghaznavids, Seldjouks, Arabs, Rajputs, Mughals, etc.

We can also now differentiate the different cultures by the different geographical regions: Kashmir, the Hunza valley and Gilgit-Baltistan, the Chitral valley to the north, Balochistan, Khyber Pakhtunkhwas, Sind and Punjab with its capital Lahore, center of Indus culture.

Mongolian cuisine is quite simple cuisine, mainly limited by the arid regions of the Mongolian Plateau, whether the steppe, which covers most of these regions, the Gobi Desert, the Khangai. Most of the food comes from animals, whether for their meat, fat or dairy products they produce. Millet is the main Mongolian cereal, but barley and wheat are also used. Fruits and vegetables are almost absent from the kitchen.

This chapter is devoted to the cultures of Xinjiang where the current dominant people are represented by the Uyghurs. The name Xinjiang means "new frontiers" and was adopted by Qing Manchuria. But history has made this region a mixture of peoples and cultures. During prehistoric times, cultural influence came from the northwest and moved east until the 3rd century AD when Buddhism appeared in the region. The Scythian empire gives way to the Kouchan empire which left many pictorial traces especially in the caves of Kizil and marks the beginning of the Silk Roads. Then in the 7th century, it is the Tang culture which dominates the region but for a short time, because in the 8th century the Tibetan Empire controls the region before the Tang with the help of the Uyghurs regain control. From 840, the Uyghurs were pushed back to the south by the Kyrgyz, they will remain there to this day.
The Uyghur people are therefore an ancient Turkish people who greatly influenced Asian civilizations. The Uyghurs were the first sedentary among the Turkic peoples. Influenced by Manichaeism and then by Buddhism, whose heyday extends from the 9th to the 10th centuries, and was a highlight in the history of the region in artistic and literary terms. Subsequently, the Uyghur Islamic era gave birth to famous works of the 11th century such as the "Compendium of Turkish languages" by the philosopher and lexicographer Mahmoud Al-Kachgari and "The Science which brings happiness" by the philosopher Yusuf Balasagun, prides literary works from all over the Turkish world. The place of Uyghur civilization is as important there as the Greco-Roman civilization for the Western world.

Fully vaccinated travellers don't have to quarantine upon arrival in Nepal

Nepal is reopening its borders to tourists from all over the world. Here you will find all the information you need to enter the country.

Top 10 things to do in Karakol, Kyrgyzstan

Karakol is a great base camp for day tours or multi-day tours in the mountains near by. The trekking and horseback riding possibilities are limitless and it’s still possible to find places that are untouched by large tour groups. My advice is to spend at least one full day in Karakol to just walk around and enjoy something different than Bishkek, Osh, and Kochkor. I hope you enjoy this blog post about Karakol and the area if you have any questions about the Karakol area get a hold of me. You can enjoy a short film about me here: About Alex

Are you an independent traveler? Do you like the freedom of trekking at your own pace and to stop and take pictures or stop when you wish?  I have created a list of great trekking spots here in Kyrgyzstan where you can hike independently.  If you wish to hire a guide or to join an open group tour with a guide that knows the areas from first-hand account feel free to write me.  I can set you up with local guides and drivers to show you the best spots here in Kyrgyzstan.  If you would like to rent a 4x4 for your trip where you can do the hikes from the doors of your 4x4 let me know I can rent you a strong 4x4.  I hope you like the list that I have created and tell your friends about Kyrgyzstan!

My Top 10 Reasons to Come to Kyrgyzstan

This is a great hike from Tash Rabat to Chatyr Kol. It's long, so if you are taking camping equipment, you would probably want to do this in two days. There is a yurt camp at the end of the hike, so you can do this with a day pack. There are yak herds along the trek, so you are likely to encounter them. They tend to be afraid of humans.

Coordination office of CBT Arslanbob leading by Hayat. Our local partner for trekking, horseback riding and ski touring in the region of the largest nuts forest in the world. With Hayat the coordinator of CBT Arslanbob, we are developing new routes and programs. In partnership with the Swiss NGO "Boule de neige", we are supporting winter sport access to children of Arslanbob village.

Shepherd's Life is an ecotourism association founded by Helvetas offering yurt house and homestays on the territory of Naryn. Ainura is the coordinator and office is based in Kochkor. In partnership with the association, Nomad's Land develops new programs and contributes to the training of local tourism employees.

"Boule de Neige" was born after several friends' stays in the mountains of Central Asia.

Thanks to Samuel Maret, long-established in Kyrgyzstan, these friends, originally from the Valais Alps, have forged lasting links with schools and sports clubs also keen on snowboarding, skiing and other disciplines and winter recreation.

The beneficiaries of our actions thank you for your support.

Nomad's Land is member of the Kyrgyz Association of Tour Operators (KATO).

КАТО is a non-profit organization that defends the corporate interests of its members and the rights of its clients.
The Association’s most important goal is the creation of a civilized tourism market and assistance in the tourism industry development at the national level.

Mission
- Creation of a favorable environment for the tourism industry, which is based on globally used principles and standards and will contribute to further economic growth and prosperity in the regions.

– Assistance in protection of environment and animals, territories that have historical, cult, cultural and and environmental significance through the development of responsible recreation, ecological tourism, travel and tourism;

The word “Adoption” in the name of our organization means individual sponsorship and financial support to the lonely  and desperately needy elder people.

Nomad's Land is a member of the Mountain Cluster association which aims to develop tourist infrastructure in the mountains. At the initiative of the governor of Issyk Kul Oblast, a bill has been submitted to the government to guarantee investment in this area.