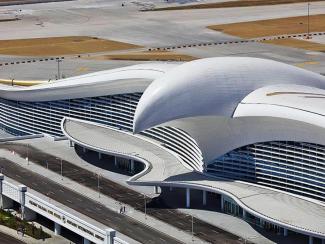 Turkmenistan • Flights and getting there

Airports of Turkmenistan are one of the most developed parts of the state transport infrastructure providing the high-speed communication between cities in the country and with foreign countries.

Customs:
Import regulations:
Free import for passengers of 18 years or older:
- 2 packs of tobacco products;
- 1,5 liters of alcoholic beverages;
- 1 kilogram of jewelry;
- personal belongings up to a reasonable value.

Arms and Ammunition regulations:
Import permit, issued by the Ministry of Internal Affairs, is required.

Additional Information on regulations:
Customs declaration must be handed over on departure. The import of plants is only allowed with a special agricultural permit, issued by the State Committee for Environmental Protection and Land Resources of Turkmenistan.

Export regulations:
Objects, which have artistic, historical, scientific and cultural values require an export permit issued by the Ministry of Culture of Turkmenistan.

Pets:
Dogs and cats need a veterinarian certificate of good health issued at point of origin no longer than 10 days prior to arrival in Turkmenistan. In case these regulations are not complied with, the animal will be kept in quarantine. Pets may enter as passenger's checked baggage, in the cabin or as cargo.

Baggage Clearance regulations:
Baggage is cleared at the first airport of entry in Turkmenistan.

Currency
Currency Import regulations:
Local currency (Turkmen New Manat - TMT): allowed for residents of Turkmenistan if the amount has been declared on the customs declaration when leaving the country. Foreign currencies: allowed if declared on arrival.

Additionally $50 are charged for the issue of visas at the international airport of Ashgabat.