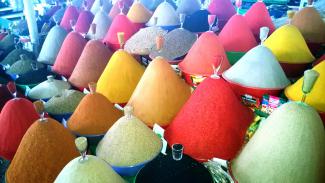 The territory that now constitutes Tajikistan was previously home to several ancient cultures, including the city of Sarazm of the Neolithic and the Bronze Age, and was later home to kingdoms ruled by people of different faiths and cultures, including the Oxus civilization, Andronovo culture, Buddhism, Nestorian Christianity, Zoroastrianism, and Manichaeism. The area has been ruled by numerous empires and dynasties, including the Achaemenid Empire, Hephthalite Empire, Samanid Empire, Mongol Empire, Timurid dynasty, and the Russian Empire.